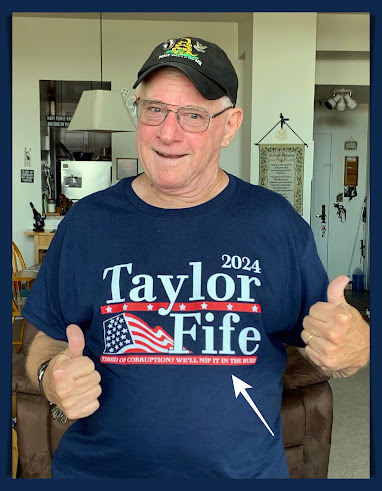 As a rule, this blog avoids hot topics, particularly those of a political nature. That said, the question is Why is Grenville posing with an endorsement for two political candidates?
These are not just any two candidates.
Actually, these aren't even real candidates.
Some of you may be wondering who are these two candidates?
Others in our ahem age group may readily recall the names. 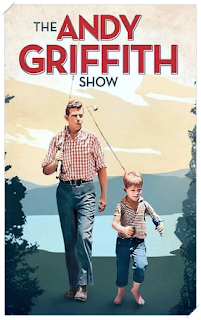 Here's a hint, they're were the characters in a popular American TV sit-com that ran for eight seasons from 1960-1968. It followed a small town sheriff and his well-meaning, bumbling deputy in a fictional NC town, modeled after the real hometown of the main actor. Ironically, not a single shot was filmed there; the series was all done in Hollywood, CA.
Did you figure out it was The Andy Griffith Show?
The show was televised on CBS from October 1960 to April 1968. Griffith played Andy Taylor, a widowed sheriff in the fictional town of Mayberry, NC. His deputy, Barney Fife, was played by actor Don Knotts and nip it in the bud became his signature phrase.
Ranked by TV Guide as the 9th-best show in American TV history, the series was never lower than seventh in ratings. It ended its final season at number one.
It's lasting popularity has generated much show-related merchandise, especially in the real town of Mount Airy, NC (which we visited on an earlier road trip). Several gift stores there specialize in everything related to Mayberry. Grenville ordered this t-shirt from one, Mayberry on Main, after he recently saw someone wearing one.
Deputy Fife used the phrase in many episodes and One-Punch Opie is one in particular. This episode in the third season (December 1962) centered around Opie being bullied by a new boy who also encourages other youngsters to do misdeeds.
When Taylor and Fife find out, the deputy is outraged, telling the sheriff that something must be done: I say this calls for action, and now . . . Nip it in the bud! First sign a youngster's going wrong.
If you want to take a trip down memory lane, this YouTube link has deputy Barney Fife saying the infamous catch phrase in that episode.
FYI—this post is the first and last reference to political candidates—fictional or otherwise—that will appear on this blog.
Thanks to all who commented on the previous post about whether to repair or replace items. It seems that most folks would repair an item, if possible. But, sometimes it's not only more costly but hard to do given that some items may have be obsolete by the time a repair is needed.
Enjoy Your Weekend, Everyone
🍁Fall has (finally) 🍂arrived in Nashua, NH, with cooler temps
We're visiting family & friends in NJ and PA this week
Posted by Beatrice P. Boyd at 7:00 AM

That's a great tee-shirt on Grenville. Ah, Taylor and Fife, a wonderful team!

No, I never saw the Andy Griffith Show although I heard about it. "Nip it in the bud" is a popular expression, and it's good to know it came from that show.

I love Andy and Barney and still watch them sometimes, we have a channel that runs them over and over for days. I did not pick up on the names, I was to busy thinking how crazy it is to wear political shirts these days because someone might run you over with a car or even shoot you... I thought it was real

I think we already have Fife on board. 😏

We loved that show and use the phrase all the time. I read a bit of Don Knott’s bio via a Facebook story on him. It was very interesting. He started out doing ventriloquism and was a decorated veteran.

I remember Don Knotts as the nervous man on Steve Allen's Show in the 50's. Other regulars were Louis Nye as the pseudo-man-about town, Bill Dana as Jose Jimenez, Tom Poston as a clueless confused man, as well as many others who appeared in the Man-In-The-Street sketches. Oh my. You have brought back some really pleasant memories.

This made me smile! Any time we see a police car, especially one watching for traffic situations on the highway, we say, "There's a Barney!" He made quite the impression!

I grew up on the Andy Griffith Show.

My late father used to whistle along to their theme song.

dear Dorthey, i am Baili , i am posting from my youngest son's laptop though i am unable to comment from teh same laptop and being less aware of such stuff makes me wonder what to do so i changed the name in his profile and commenting through though clicking on my name will lead you nowhere.

now about this post, i loved old comedy shows more because artists in them seems more real and doing their job astonishingly "effortlessly" which consumed the attention of spectator completely.
thanks for sharing delightful link though it was before i born but beautiful indeed .
Patrick looks cool in this shirt .
much more health peace and happiness to you both

Loved the Andy Griffith show, so thanks for the memories. Have a wonderful time in my neck of the woods. So far, we've got great weather.

Ah. I didn't think back to the Andy Griffith show, but it is funny that their names are on political T shirts from those gift shops. Hope your visit is going well. hugs-Erika

Beatrice, I love Grenville's t-shirt and political commentary. It's very fitting given the condition of politics here in the USA... Take Care, Big Daddy Dave

A show that's never been screened in the UK. I'm trying to think of a home-grown show that features a police chief and a bumbling deputy, but I can't think of one.

Great photo of hubby and I love the shirt. I used to watch The Andy Griffith Show and always enjoyed their humor. Thanks for the link. I will check it out.