Snow has not been a regular weather event here in Nashua, NH, in recent weeks, unlike other areas of the state, New England, other U.S. states and in neighboring Canada. We've received a scant 5 to 6 inches snowfall from a recent storm. An early morning snowfall this week produced an early morning wintry scene, but later turned to rain. 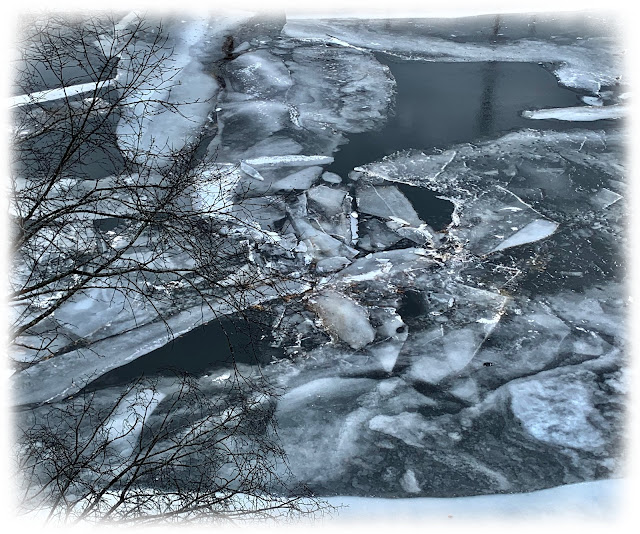 Despite the snowfall deficit, temperatures have hovered in the single digits for many overnights the past couple of weeks. It has caused ice to form on the Nashua River, but not to freeze it entirely solid for which the gulls and ducks have seemed thankful. 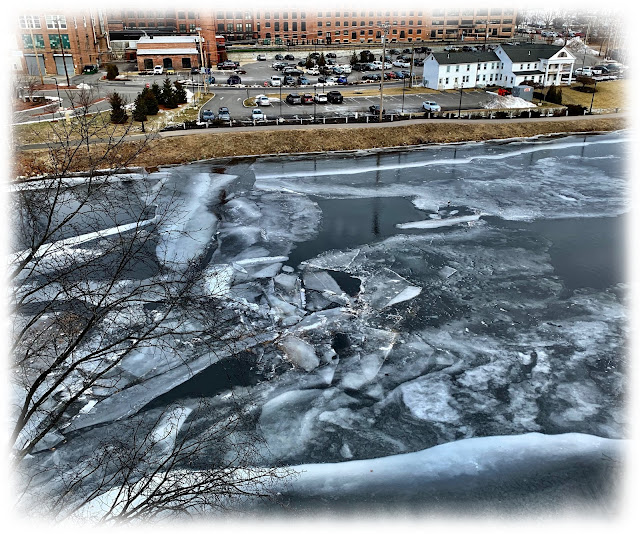 Some warming daytime temps this week started these ice break-ups while creating geometric shapes. These images were taken (as usual) from the comfort (and warmth) of our 5th floor apt. These images are straight out of camera (SOOC) with no post processing applied to them; including the blueish tint (brrrr).
Enjoy Your Weekend, Everyone
A snow-less one is forecast here
Posted by Beatrice P. Boyd at 7:00 AM

Much of the snow that we got from Winter Storm Izzy (around 13 inches) is still with us. We did have one warmish day since Izzy left, and the snow did shrink a bit. This weekend will be snowless for us as well but snow is in the forecast Sun-Tue. It is too early to tell how much snow will fall. Have a wonderful weekend!

Those a cool ice views. With this weekend's cold and the cold over nights it looks like we'll have, I bet that view will change. Stay warm Dorothy! hugs-Erika

Nice patterns, I suppose right from your window. We just had some excitement outside our window. I guess it will give me another post in the dead of winter.

Lovely ice patterns...and you have a great birds-eye view of the river ice!

It is minus twenty-six here this morning, and I have to go out. I doubt that I will be dallying to check the patterns formed by the ice!

Wonderful photos of the ice formations on the river. I guess they were taken from your window. Have a good weekend.

It is nice to see how nature makes art! We just need to have the eye to see it and mind to enjoy it. Nice shots!

that ice is perfect art to me. so beautiful. of course its more beautiful knowing you are inside. natures art can't be beat

I love seeing the ice there. It really makes for such beautiful designs and images. Stay warm and safe!

Intriguing shapes on the river...perhaps there will be an early spring.

That looks pretty. I bet those on the ground are not able to see the beauty of it. We had 18 inches overnight on Sunday. It was quite a surprise after so little snow so far.

I love seeing designs such as this. Of course, I'm never up as high as you yet the ice designs always fascinate me too. No snow in our forecast but boy is it cold!...brrrrr (a hike scheduled tomorrow 4 hrs)...jp

Interesting ice patterns on your river! Hope there was no ice on the sidewalks too. That would make walking hazardous.

What an amazing view you have from that 5th story window!! Beautiful!!!

No snow here either. I am quite glad because our city council is not really setup to deal with snow. I think I like the idea of snow better than actual snow. The icy river looks beatiful. I find it difficult to imagine a river freezing over. Is the ice sometimes strong enough to walk on? Have a lovely weekend.

That ice is really dramatically beautiful! :)

Cool! Yes, it is cool with the ice. I'm sure these patterns change as the ice moves.

Amazing shapes and designs!! Neat that you have a high rise view!

Lovely to see your snowy, icy photos. Here’s me longing for snow and I bet you wished yours would go away. Such is life. B x

Those are super "ice" photos. Enjoy your day, hugs, Edna B.

Thanks for your nice comment on the return of my blog - it is appreciated. I'm enjoying reading everyone else's blogs now and I do love this photograph on your latest post. It is strangely dramatic, like some huge piece of modern art!

Beautiful pics. A lovely view. Amazing your snowfall has been so scant. Here we got 3 inches today and are expecting 4 or 5 more tomorrow. Not happy about the shoveling.

How neat that you can see them from your apartment!

That's so neat that you can see the river from your Apartment window. Fabulous place to live. The ice crystal shapes are lovely, but yes brrrrr.

We've had lots of frosty mornings and cold days but thankfully no snow. The ice in your photos looks beautiful Beatrice, a good capture.

Wow, that's quite the photo! Love it!
We are just getting little bits of snow, nothing major yet and I'm perfectly fine with that ☺

The weather people think New York may be clobbered by a blizzard this weekend, but they're not sure yet. Oy...

Dorothy, Very interesting and attractive patterns in the ice! We never get cold enough long enough to freeze over any lakes or rivers. 5 to 6 inches of snow would paralyze our area for at least 3 days unless it warmed up quickly. We've only dipped down into the high teens overnight so far this winter. Take Care, Big Daddy Dave

As you know we have had many days below zero just an hour and half north of you. Some loons that lost their flight wings were rescued from the lake here. The storm coming in I think you are getting the bulk of that which will make the ski area's
Stay warm
Cathy