How Sweet These Treats

Do you have a favorite sweet treat?

Maybe that long-time favorite is now a vintage candy. Recently, I came across a store display with boxes of some of these treats. A lot were popular in my "younger" days and apparently many are still being marketed. The display made me curious to learn more about the history of some of these candies. 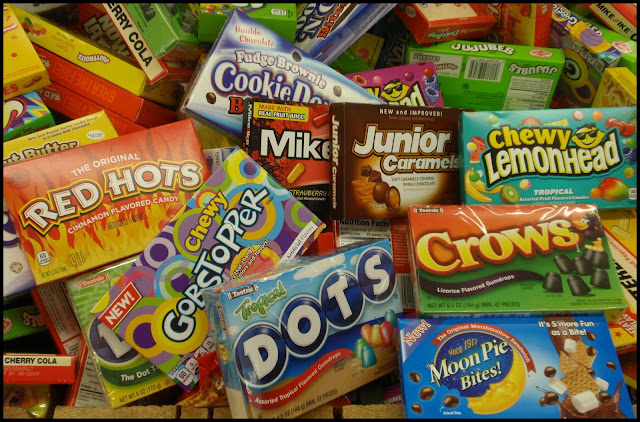 See how many of these you can remember having enjoyed over the years. 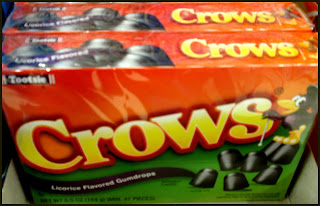 Black Crows (now called Crows) are licorice gum drops dating to the late 1890s. These popular, anise-flavored black gumdrops still enjoy a strong following. In the 1950s, they were known as Mason Black Crows and were invented in the 1890s by confectioners Henrique Cataldi and Joseph Maison. The Black Crows trademark was registered in 1911. There's an urban legend that Crows were to be called "Black Rose," but that the printer misheard the name as "Black Crows" and printed wrappers incorrectly. Later research, including the fact that the name was copyrighted before the candies ever came with wrappers, has shown this story isn't true. In 1972, Tootsie Roll Industries acquired the Crows brand by purchasing the Mason Division of the Candy Corporation of America. The same company also made Mason Dots which today are also made by Tootsie Roll Industries. 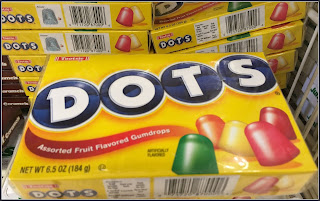 DOTS are a brand of gum drops marketed by Tootsie Roll Industries and are also called Mason Dots (trademarked DOTS). For more than 50 years, Black Crows were produced as a standard gumdrop flavor until these fruit-flavored siblings were introduced after World War II. DOTS candy was introduced and trademarked in 1945 and is now marketed as America's #1 selling gumdrop brand. Here's a couple of interesting "facts" — DOTS are considered a vegan candy and are also labeled as kosher. Maybe those facts have contributed to estimates that over four billion DOTS candies are produced from the Tootsie Roll Industries Chicago, IL plant annually.  Tootsie Roll Industries acquired the DOTS brand after buying the Mason Division of Candy Corporation of America in 1972. Before then, they were manufactured by Mason, AU and Magenheimer Confectionery Manufacturing Co. of Brooklyn and later Minneola, NY. The candy is still packaged in familiar, yellow cardboard boxes. 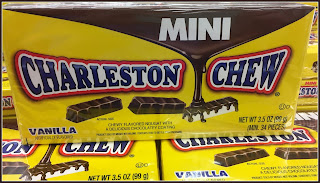 Charleston Chew is a candy bar made of flavored nougat covered in chocolate flavor coating. It was created in 1925 by the Fox-Cross Candy Company, founded by stage actor Donley Cross and Charlie Fox. The  candy's name comes from the Charleston, a popular dance of that time.
The company was purchased in 1957 by Nathan Sloane and sold to Nabisco in 1980. Sloane changed the candy's original blueprint of chocolate-covered vanilla taffy. In the 1970s, he introduced new flavors of chocolate and strawberry. Warner-Lambert purchased Charleston Chew from RJR Nabisco in 1988. In 1993, Tootsie Roll Industries purchased the brand from Warner-Lambert. 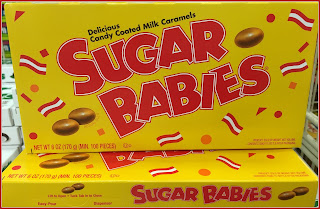 Sugar Babies were named after a song titled Let Me Be Your Sugar Baby. These bite-sized, chewy milk caramel sweets are an American confection originally developed in 1935 by the James O. Welch Co. in Cambridge, MA. Welch produced them with the rest of the "Sugar Family" which included Sugar Daddy and Sugar Mama. The candy patriarch, Sugar Daddy, is a hard caramel candy on a stick invented in 1925 by chocolate salesman Robert Welch, brother of James. It was originally called the Papa Sucker before it was renamed in 1932.  A chocolate-covered version, the Sugar Mama, was produced from 1965 to the 1980s. The company was purchased by the National Biscuit Company in 1963. 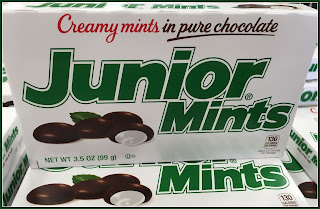 Junior Mints were introduced in 1949 by the same James O. Welch Co. that introduced Sugar Babies, Welch's Fudge, and Pom Poms to sweet tooths everywhere.
The product name is thought to be a pun on Junior Miss, a collection of stories by Sally Benson that were in the The New Yorker magazine. The stories were adapted into a successful Moss Hart play which ran on Broadway from 1941 to 1943. According to company history, when Welch developed and launched the candy, he named it after his favorite show. However, the candy debuted six years after the Broadway play had closed.
Welch, who was born in Hertford, NC, founded his Cambridge candy company in 1927. His partner and brother, Robert Welch, retired from the confectionery business in 1956 and two years later founded the John Birch Society. 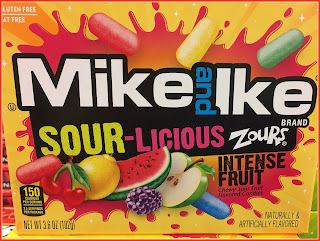 Mike and Ike are oblong chewy candies that were originally all fruit-flavored, but now come in different varieties introduced over the years. The candy was first introduced in 1940 by the company best known for Peeps candies, Just Born, Inc. located in Bethlehem, PA. The origin of the candy's name remains unknown, but there's several theories on how it was named.
One is that it was named after a comic strip, Mike and Ike (They Look Alike) which ended in the 1940s. Another is that it was named for the Matina Brothers, circus midgets who were nicknamed "Mike" & "Ike" and had a role in the film The Wizard of Oz (1939) as munchkins. Other possibilities include a company-wide contest, a vaudeville song titled “Mike and Ike,, and the the Eisenhower era which was nicknamed ("IKE"). Despite these speculations, the origin of the candy's name remains unknown. 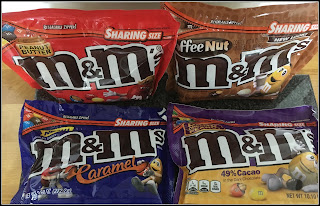 M&M's are colorful button-shaped chocolates. Each candy piece has the  letter "m" printed in lower case on one side surrounding a filling. The candies are the flagship product of the Mars Wrigley Confectionery division of Mars, Inc. and originated in the U.S. in 1941. More than 400 million individual M&M's are produced daily in the U.S. in different colors, some of which have changed over the years. Since 2003, they've been sold in over 100 countries.

Forrest Mars, Sr., son of Mars Company founder, Frank C. Mars, copied the idea for the candy in the 1930s during the Spanish Civil War after seeing soldiers eating British-made Smarties, chocolate pellets with a colored shell of what confectioners call hard-panning (essentially hardened sugar syrup) surrounding the outside that prevented the candies from melting in warm temps. Mars received a patent for his own process in March 1941 and production began in a factory in Newark, NJ. When the company was founded it was M&M Limited. The two "Ms" represented Forrest E. Mars Sr. and Bruce Murrie, son of Hershey Chocolate's president William Murrie, who had a 20 percent share in the product. This arrangement allowed candies to be made with Hershey chocolate as Hershey had control of rationed chocolate at the time.

The company's first big customer was the U.S. army, which saw the invention as a way to let soldiers carry chocolate in warmer climates without melting. During WW II, the candies were sold exclusively to the military. Demand for the candies caused an increase in production and the company moved its factory to Newark, NJ, where it remained until 1958 until relocating to a bigger facility in Hackettstown, NJ. In 1949, the tagline Melts in your mouth, not in your hand was added. In 1950, a black "M" was imprinted on the candies giving them a unique trademark. It was changed to white in 1954.

The original candy had a milk chocolate filling, now branded as the "plain" variety. "Peanut" M&M's which feature a peanut coated in milk chocolate, and a candy shell were the first variation and remain popular. Numerous variations have been introduced, such as peanut butter, almond, pretzel, crispy, dark chocolate, and caramel. Some other varieties are limited in duration or geographic availability.
If you're curious about my favorite candy from this post?
Hands down it's M&Ms, especially dark chocolate and peanut butter varieties. I've never been a fan of "chewy" type candies and am very mindful of how they can destroy dental fillings.

Do you have a favorite candy treat?

Enjoy a sweet weekend, Everyone
Posted by Beatrice P. Boyd at 7:00 AM

I would have to say that most of these did not cross the border, not that I noticed anyway.

OK, I now need to go buy some candy. You made me hungry for some sweets. I pick up Cherry Mash at the Hobby Lobby store when I see them. You really gave us a great history lesson on some of these candies. One of them I had never heard of. It must have been regional. Thanks for sharing and have a great weekend.

I used to love sugar babies as a kid. These days it is just a piece of Dove chocolate once in a while.

M&Ms are the only one that I recognise, despite been to America numerous times.

What a fun post and about one of my favorite topics. We love candy here and surely eat much too much of it. We own Hershey's stock so eating all that candy is good for our stock. Ah, yes, justification.

Sugar babies, sugar daddies, and M&M's. those were my favorites growing up. Now it is just a piece of good chocolate every now and then.

I also like chocolate the best... dark chocolate is best. It was fun to learn the histories of these candies.

M&Ms and Junior Mints I know about. The rest are a bit of a mystery to me.

In Canada we didn't have any of these except the M& M's. Now there's something for your research!

Sugar babies, Junior Mints, and Peanut M&M's would be my favorites on this list. I'm not as fond of the chewy, gummy types either.

I love the really dark chocolate with sea salt.

Oh my! It's hard to pick just one! But I always loved eating out of a bag of m & m s! Thanks for coming over to give me words of encouragement my friend. I hope and pray I get my old Lavender Dreams back!!! Hugs, Diane

I was never much of a candy person. Of course as a kid I loved it but since all of my dental issues since Dec I don't indulge but if I would choose I would choose sour gummies so bad for teeth.
cathy