First, MANY THANKS to fellow bloggers and friends who have called and/or emailed to ask if we were OK during the megastorm called Sandy. We appreciated your concern and are OK, as are family members along the east coast; some in NJ lost power, which hopefully will be restored soon. We pray that you and yours fared well during the storm’s worst. Today’s forecast on the VA eastern shore is intermittent showers and light winds, thankfully. 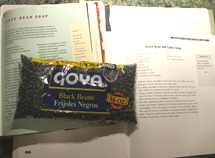 IF you were reading Grenville’s weather update posts yesterday, you know that our area, like most of the eastern U.S. was pummeled with relentless downpours and gusting winds. It was perfect soup weather, if you didn’t lose power OR have a gas stove (as we do). 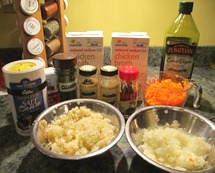 Black bean soup was on the menu with nasty weather outside The Frog & PenguINN. I’ve ordered it when dining out, but never made it. Best of all, it uses many of our favorite spices, ones starting with the letter “C” like cumin, coriander, cilantro, cayenne. And, while not a spice, chicken broth also coincidentally it also begins with “C.”

Sort through beans to discard any that don’t look good; then soak overnight in enough cold water to cover. Failing to do that, I followed a fast method on the bean package: sort, wash, add 3-4 cups of hot water, boil 2-3 minutes, then set aside for 1 hour before using.

Notes: Tried using the immersion blender, which had trouble pureeing the beans, so switched to food processor.

To spice up the flavor, I added a dash of cayenne pepper (not too much) and 1TBSP of chipotle seasoning.

Yield was two containers. One was frozen for another meal; the other is on tonight’s dinner menu to be enjoyed with a salad and Grenville’s homemade bread.

Relieved to hear that you and your family are okay. We are too and worry about our friends further up north. Take good care of yourselves, and oh my, thank you for this recipe. It's going on my list now that the weather is turning chillier.

I'm happy to read that you came through this storm without problems.

That sounds wonderful. So glad you made it through the storm without too much hassle. Roanoke fared well - lucky us!

Glad you came through the storm OK.

The soup can certainly be a good comfort food in times of stress, no doubt!

Again, I'm glad you all are OK!

I'm glad You are ok!
We've read reports on how bad the storm hit NY and New Jersey.

I think I'm one day early wishing Happy Halloween but I'm not sure I'm out in the cyber space tomorrow :-)

I'm glad you fared well enough in the storm. Soup during the storm is about as cozy and secure as one can be!

Sounds delicious. Glad you are OK.

Soups are a favorite here too...I am in last stages of selling the PA house, the very loud Hallelujiah you will hear will be me! Hope you are weathering the storm well. Sandy was a very nasty gal...

sounds good to me and thanks for reminding me i have not made dirty rice with black beans in ages, forgot all about it. next week i will purchase the ingredients.

So glad to hear you are all safe and sound.

Glad to know you are OK out there. Our son and family in Alexandria VA fared well, too. They lost power for a time, but otherwise were fine.

So glad you came through OK. We had a lot of wind but little rain. Very lucky.

Looks perfect for weathering the storm!

It is a relief to know you and other blogging friends are okay. Only one hasn't been in touch. Still praying! We have the winds now and it's very cold.

Love the idea of black bean soup right now, I will try your recipe.

Your soup sounds good! I'm so glad to hear you made it through the storm OK.

Your soup sounds and looks delicious. It looks like a great recipe. I am glad you two are ok.

You need to call it your Frankenstorm soup! Looks delish!