Flea Market Finds (or Not) 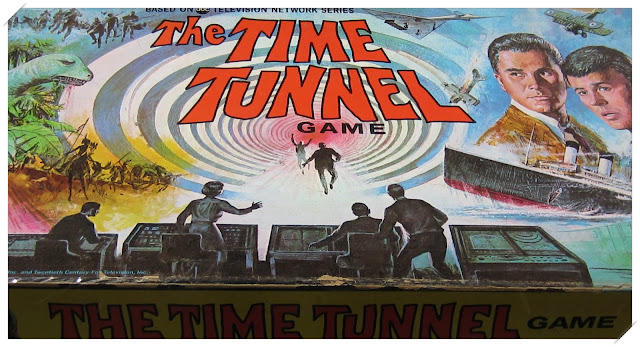 Admittedly, we are flea market aficionados and while we're never looking for anything specific we enjoy spending time some weekend mornings at two local ones. You never know what you'll find, like the game above (Ideal 1966), which neither Grenville or myself played or bought. 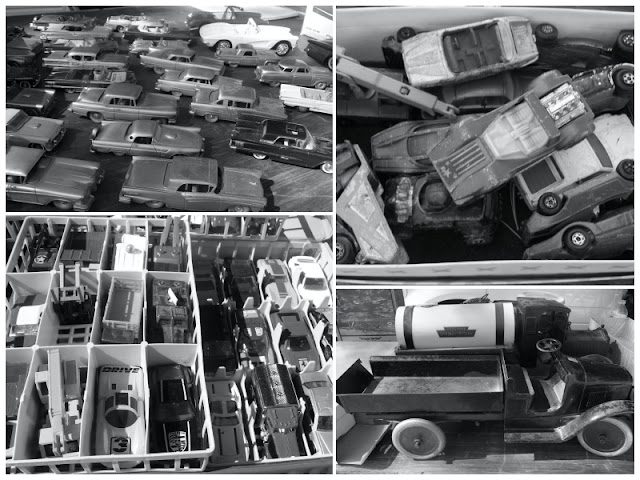 A recent attempt to visit  a weekend flea market was cancelled due to overnight rains the night before. Fortunately, that led to our exploration of a unique furniture emporium, Deja Vu in Londonderry, NH. 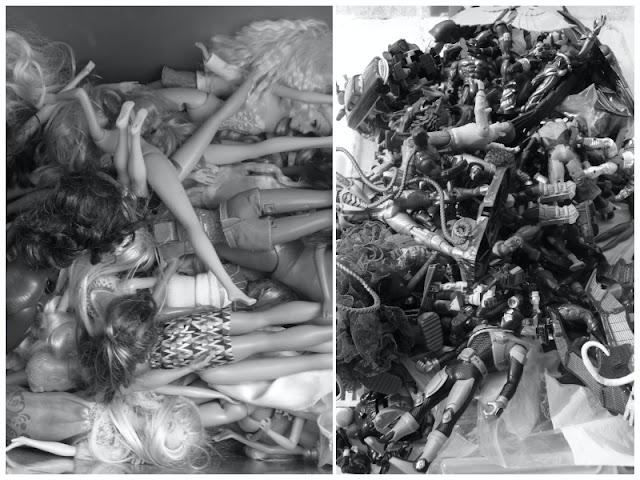 Last weekend was sunny and warm so we stopped at two popular outdoor flea markets in Hollis and Londonderry, NH. The Hollis market (7 miles away) is only open on Sundays; Londonderry (9 miles) is open both weekend mornings. The two markets are about a 30-minute drive apart so we visited them on separate days as we really like to linger and look, even if we don't buy. 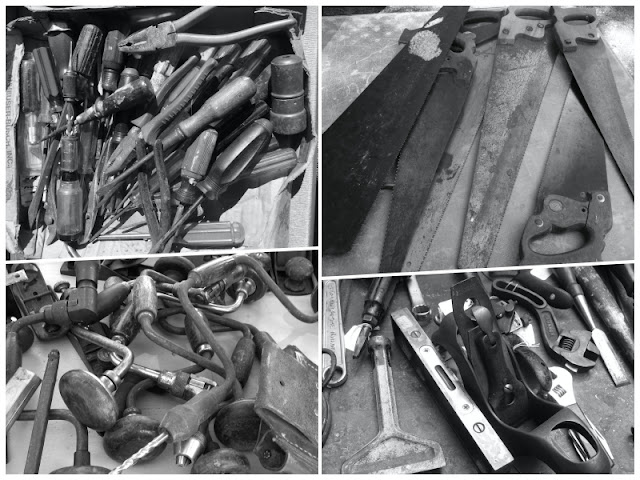 The term flea market is generally considered to originate with the French marché aux puces an outdoor bazaar in Paris, France. It translates to "market of the fleas" and likely referred to flea-infested used merchandise. Not to be confused with swap meets which can involve strictly swapping goods with no money involved, flea markets usually deal exclusively in the exchange of cash for transactions.

Flea market selling is distinguished from street vending in that the market itself, and not any other public attraction, brings in the buyers. There's a variety of vendors — some part-time sellers consider their sales a hobby due to a "regular" job; full-time sellers dedicate full time to their stalls and collection of merchandise and rely solely on profits made selling at the market. 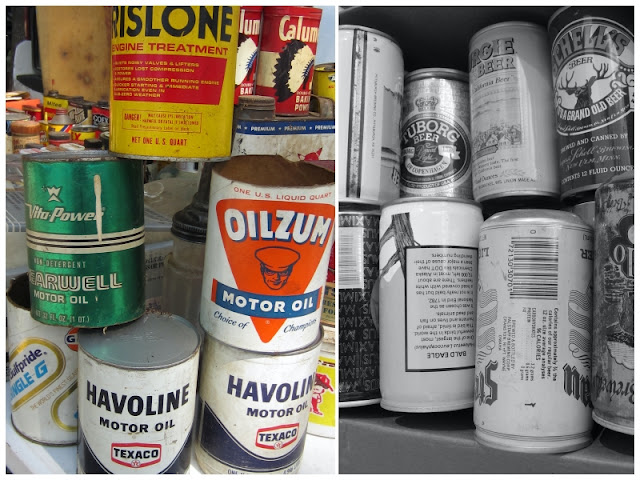 Different English-speaking countries use various names for flea markets. In Australian English, they are called trash and treasure markets. In the UK, they're known as car boot sales.If the event takes place in a field or car park, vendors will sell goods from the boot (trunk) of their car. If held indoors in a school or church hall, it's usually known as a jumble sale, or bring-and-buy sale. In Quebec, like France, they're often called Marché aux puces (flea markets). In Japan, where the words flea and free are transcribed in the same Japanese phonetic letters, the term  free market has gained wide use. 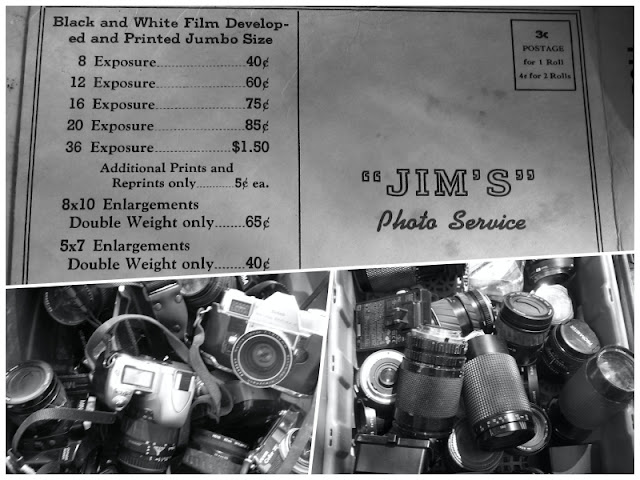 The Londonderry Flea Market is situated on about 30 acres and hosts a variety of sellers selling goods ranging from antiques to toiletries. Many sellers have permanent locations, others are there on an intermittent basis. 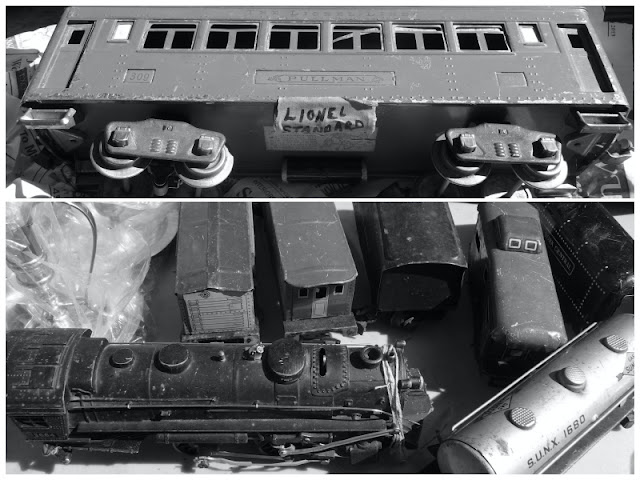 Regular vendors who sell the entire season usually bring in new or different items to add to their inventory. There are also weekend sellers, many of these are yard sellers who only rent space to sell items no longer needed in their own homes and who prefer not to have home yard sales. 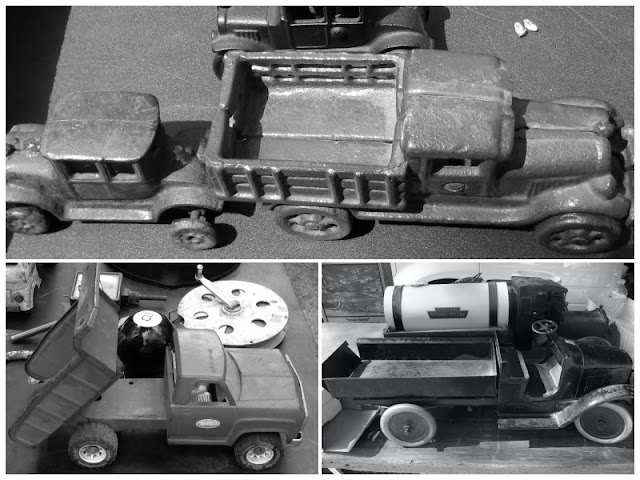 Like all outdoor markets, open hours are weather dependent and the Londonderry market is open Saturdays and Sundays, 8 a.m. to 3 p.m, from April to October. Parking is $1.50 and free for seniors, like ourselves. 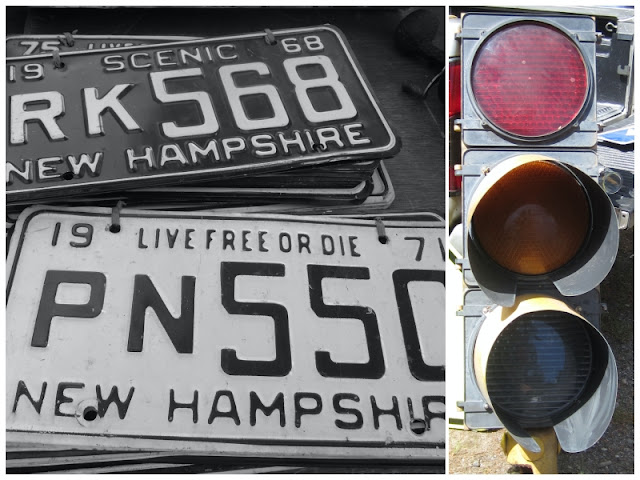 The Hollis Flea Market in operation since 1964 is considered among the oldest running flea markets in NH. Vendors are spread across over 20 acres with up to 400 vendors on any given Sunday morning. Early bird shoppers have been counted at over a thousand. This flea market is a family run affair and is currently in its second generation of owners. 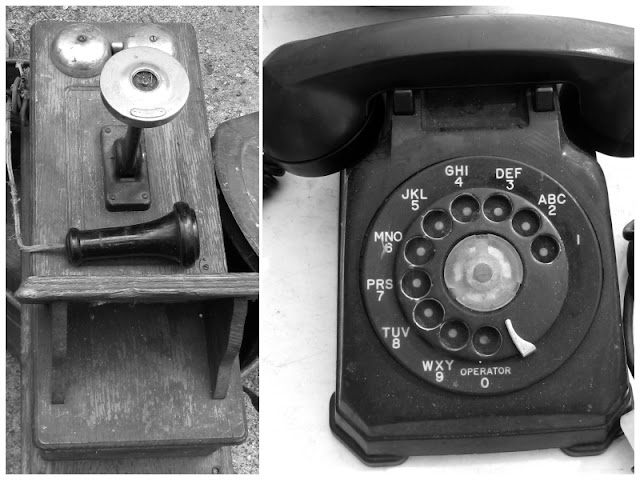 Since it's a weekly market, there's many regular vendors. Like at Londonderry, there are sellers who would rather tout their wares to an established crowd rather than at a private yard sale. This ensures there's usually a wide variety of items from antiques to new or nearly so. 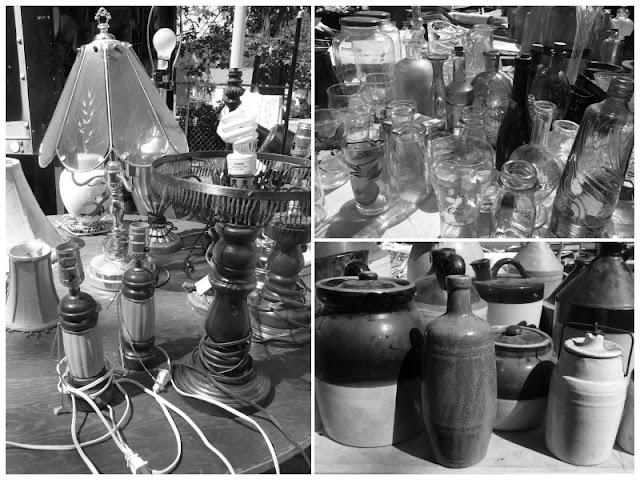 As at Londonderry, there is parking fee which is slightly higher at $2 with no discounts. There's also a food concession with outdoor seating available. This market is just down the road from a state recreation area, typically a police officer is directing pedestrian crossings as there's two areas to the market. 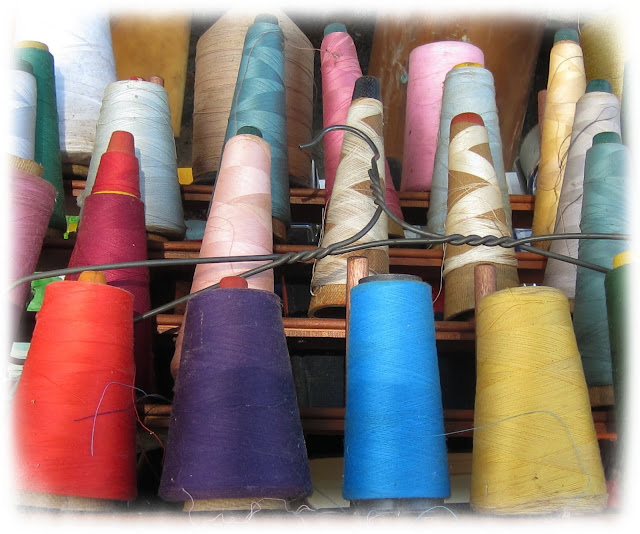 While we don't always hardly buy at these markets, the low cost/free admission is worth the time spent looking and sometimes seeing things that bring back a memory or two. Yes, sometimes Grenville or myself will make a purchase as you never know when you'll find that great deal. 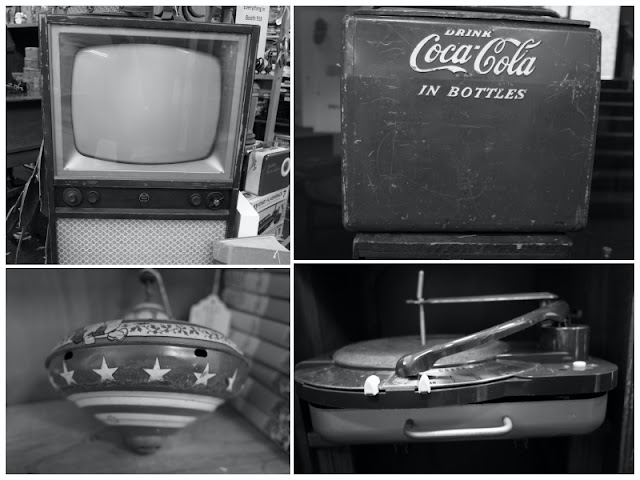 How about you — do you enjoy these types of sales?
Posted by Beatrice P. Boyd at 7:00 AM

I am not a huge fan of flea markets. I find the crowds a little disconcerting! However, I do go from time to time, especially if I know of a book seller there, and I am on the hunt for something specific. Right now I have one volume of a two volume set of the birds of Ontario, long since out of print. I had the pleasure of meeting the author on a couple of occasions about forty years ago shortly before he died, well into his nineties if I am not mistaken. A flea market is one of those venues where I might just come across it. And at a reasonable price too!

I enjoy them, but don't go too often. I started going with my father in junior high school and have great memories of both of us foraging for books. I do often visit local thrift stores and have found some nice treasures.

I used to love flea markets but now not so much -- too many people, for one thing, and I have so much stuff already, I should have my own booth. Now and then it's kind of fun. Maybe because I don't do it all the time!

I love love flea markets. The highlight of my vacation in Florida every year was being able to go to the flea markets. Enjoy your day there, hugs, Edna B.

Beatrice, We do go to a flea market occasionally but we already have so much stuff, we don't want or need much of anything. I do look for old postcards, collections of stamps and other odds and ends...mostly because they don't take much space. We have a huge indoor flea market nearby with most of the vendors having permanent booths. Take Care, Big Daddy Dave

Flea markets are fun. I used to be a vendor at a couple of them. Unfortunately they are becoming fewer and fewer.

I always liked walking around and seeing the items people have, they bring back memories. Here, it is boot sales and we haven't been in a few years due to covid. We mainly go to charity shops, there are plenty of those around and it's a great place to get books cheap.

I have only been to one flea market that is right outside of Amish country. I just remember a lot of Beanie Babies for sale! It’s not my thing, but I understand the appeal, esp. if prices are good.

Love all of your photos. It looks like you found a very good flea market to roam around in! It has been hard to find a good one in our area.

All of your photos are so interesting. You found a wonderful flea market it seems!

I enjoy them but have not been in a long time. I am just trying to not put anymore stuff in my house
Cathy

They are a rarity here.

I have t been to a flea market in a few years. There is a big one here in PA— Hazen, PA. I remember how interesting the wares were. We did buy a lighthouse canister set I still use. Today there were two sales on our street, an estate sale and an ordinary garage sale. Our street was extremely busy all day long!

Gosh so many interesting things to see.
We don't attend them down here but have done.

these kind of market sound little familiar to me dear Dorothy

actually we have here outdoor market which take place in all big cities and are huge like a small town, they sell almost everything not just old but new from decoration pieces ,crockery to thread and needle old or new all are there ,they are mostly very crowded so it is nice to see you could roam freely there which means there are less people ,our markets are named after holidays

The Time Tunnel was one of my favorite shows when I was a kid.

I freaked when I saw that photo. I didn't know there was a Time Tunnel board game, but I'm not surprised.

I used to go to flea markets with my family when we were on vacation. I tend to avoid them now as I have so much junk of my own.

I liked seeing the old toy trucks and trains. I would have spent a lot of money there if I had been there.

I'm not a big flea market visitor, but I do like to look for bargains and dig through bins of interesting things. Probably why I don't go to flea markets as I might spend too much money. Smile. Very nice photos.

I love flea markets. There was a really good one in the next county, but the owners sold it after many years.
Like you, I also rarely buy things, but like to look around. 😊

I do enjoy them but sadly they are a rarity here on the Island but I do visit one or two when we visit family.

When our kids were young we used to go to one not too far from us. There were regular vendors with small stores inside and others outside. Also outside were vendors who might be there only for a weekend, or a few weekends, just long enough to sell whatever they needed to. We stopped going after a while, and didn't go back for many years until I was working on various arts/crafts and figured that was the place to find items I could use. And I did. We haven't been back since before many things were closed last year. I've got enough supplies now to last a vey long time anyway.
~Mary