Me, or more accurately this wreath, which was created as my entry for the 2020 wreath competition here at our mill apt residence. 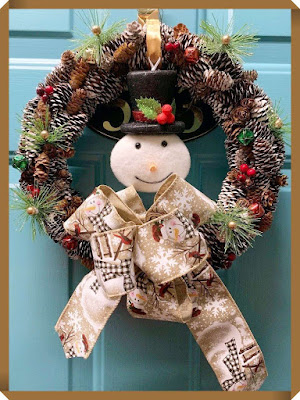 The good news is that there was a prize associated with this win — a $100 Visa gift card. The unfortunate bad news is that there was only a single prize, which of course is now mine. It's valid until 2029, and I have no immediate spending plans. However, I will be celebrating a(nother) birthday early next month, and a self-treat is always nice.
WHY did I use the term unfortunate?
For two reasons, although we live in a very large apt complex with many apt doors, there were only 4 contest entries. This is out of a complex with over 300 inside doors. Contest rules were that the entry had to be handmade and only a door wreath would qualify even though residents decorate outside their apts like as we do. Online voting was done by residents the resident portal several days after the holidays.
So why the lack of entries? It might have been due to having only a single prize award. In past years, not only had there been more entries, not an overflow to be sure, but enough to qualify for the awarding of multiple prizes, 1st, 2nd, 3rd.
Management announced, in advance of the competition, that there would only be a single grand prize award. I publicly questioned that decision and was advised that as there were never a lot of entries, it was decided to only award a single prize this year. This made no sense to me. If entrants feel they have more than one chance to win something, isn't that always better odds?
While the lack of prize categories may have resulted in the sparse number of entries. Another factor could also be indifference. However, it does seem that with so many being at home, including entire families, there would have been keener interest to possibly win.
I enjoyed working on my entry during most of November and was pleased to have won. Unlike some others, I'm not a long-time crafter, but was just having some pre-holiday fun. I created four different wreaths from pine cones and corks; the other three were given as gifts. An added benefit was listening to audio books while making them.
I thanked those who voted for my entry win, and complemented the other entrants (all done on the resident portal). And, in the spirit of graciousness, here are the other contest entries. Personally, I thought that #4 was very creative considering the present times. 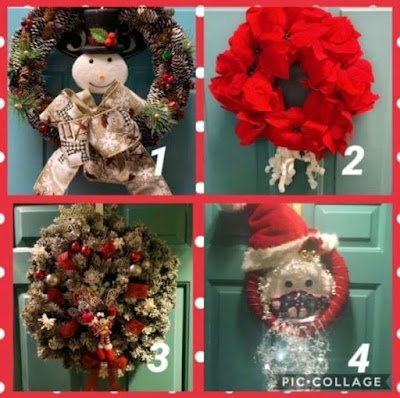 Over the weekend, we took down the holiday decorations. Notice that I did not say all of them because when we looked at the windows, these two stragglers remained. Since the containers were already back in storage and stacked, we're keeping these hanging around the apt until  joined by their counterparts this December. Has this ever happened to you as well? 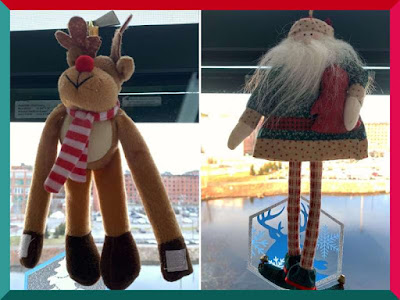 Meanwhile, we're still awaiting wintry weather to return. The  last measurable snowfall here in Nashua, NH, was Dec 11. This week, I saw photos of snowfall in parts of Texas, Canada, Japan, and Spain, so much for winter in New England.
Ending this post on a sad note and asking fellow bloggers to please keep fellow blogger Edna, in your thoughts. Her beloved canine companion, Pogo, died earlier this week.
Posted by Beatrice P. Boyd at 7:00 AM

condolences to Edna, there are so many pets dying recently, every day there is one or more in our world. so sorry to hear this. I agree with the judges, yours is by far the winner of these 4.. since i would be indifferent and not do one I understand why others did not... but i am usualy the odd woman out on things like this and it is odd there were not a few more.. i remember the last year contest. do you know how many voted? i am just wondering if they particpated in the voting but not the creating

In the spirit of cross border cooperation. if you have problems deciding where to spend your gift certificate, I will be happy to help!

Congratulations on winning. Your wreath is beautiful.
Sad news about Edna's beloved canine companion Pogo. We do love our furry companions and grieve when they go.

Such a shame there was so few entries but congratulations on inning. A worthy winner indeed, it truly was a great wreath. Like you I did admire entrant 4 it certainly made me smile.

Congratulations, Dorothy! Your entry was definitely the best. Number 3 was also nice. I didn't like 2 or 4 at all.

I was so glad to see that you won. It is a nice wreath.

Nice wreath and congrats on the win. Too bad so few people participated. Maybe people aren't going out to get supplies? Anyhow, get yourself something good when you spend it. hugs-Erika

Congrats on the win, regardless. ;)
#4 was clever, but yours was cuter. You could have put a mask on your snowman--LOL! They were all nice wreathes. I agree. More chances to win equals more interest.

Congratulations on your win. A little competition goes a long way.

Congratulations on your winning wreath. I agree that should have been multiple prizes, but a win is a win, as they say.

Sorry to hear about Edna's loss. Rest in peace, Pogo.

Congratulations on winning the competition, Beatrice.
Your wreath is definitely the prettiest one. 😊

congrats. your wreath was definitely fabulous. loved it. very creative. buy something special when the time comes to use your winnings. stay safe. take care.

Congratulations on your win! All of the entries are very pretty and creative. I agree that multiple prizes would probably have increased the entries.

It is also not the usual winter here yet.

That is a shame that so few participated. Your wreath is lovely. I would have have also thought that with the pandemic, people would have enjoyed something to do. I sent out 100 Xmas cards with personal notes because of the pandemic, but we received 40 at most.

Your wreath is beautiful. Congratulations on winning. I also thought that the last wreath was rather nice too. I'm sure there's more snow in the plans for this winter. Thank you for your kind words for my Pogo. You have a wonderful day, hugs, Edna B.

Beatrice, Hey, a win is a win and I'd never be one to turn down $100! My better half would have spent it already. We are not crafters and we didn't decorate much this year. No visitors and not much motivation. Maybe next year we'll go all out! Stay Safe and Take Care, Big Daddy Dave

Your wreath is beautiful! It's cheerful and I love all the pinecones. Maybe there weren't that many entries because people didn't feel like it in that weird year. I didn't do any decrating, but we had the light on our house which cheered up our corner a lot and we received a lot of compliments. They're still up and everybody love them. - I'm pretty sure you will eventually put the Visa gift card to good use! Congratulations on winning first prize!

They're all fun but if I was voting, I would have voted for yours too. (Not just saying!) It's too bad there aren't more prizes but congratulations. You still would have won with more entries, I'm pretty sure!

To lose one's beloved pet is heartbreaking. Our pets are so precious to us.

Congratulations on your wreath.

Congratulations on winning ... your entry was very deserving, but the others were cute too ... congrats also on your generosity of spirit. ...maybe people just didn’t have the supplies to make a decoration; it is harder to shop these days.