Murdoch — It's a Mystery

Spoiler Alert — Canadian blog readers, who know about this TV drama are free to skip reading.

WHY?
Because some folks may be tired of raves about this show, but Grenville and I are now "hooked" on this Canadian TV drama which follows a pioneering detective in Toronto, Canada at the turn of the 20th century. The Murdoch Mysteries series is based on the Detective Murdoch novels of British born/Canadian author Maureen Jennings. It is produced for TV by Toronto-based Shaftesbury, founded in 1987 by chairman and CEO Christina Jennings. It's an odd coincidence that the writer and producer have identical surnames, but are not related.

Murdoch Mysteries is currently set in 1901 and features the case-solving methods of Detective William Murdoch of the Toronto Constabulary, who uses detection methods considered quite unusual then but commonplace now — fingerprinting (called "fingermarks"), blood testing, trace evidence, wire tapping, surveillance among them.

The series is a gentle pleasure. It's filled with charm, wit, and elegant costuming. There's always a murder to be solved, but it's never particularly gruesome in its portrayal. Each episode is a finely-tuned mix of police procedures, medical whodunit, and parlor sleuthing. Plots often twist and turn, but always conclude within the self-contained episodes. However, as recurring characters appear in multiple episodes, watching the series from its start is best. And, this could take awhile with over 100 episodes online. 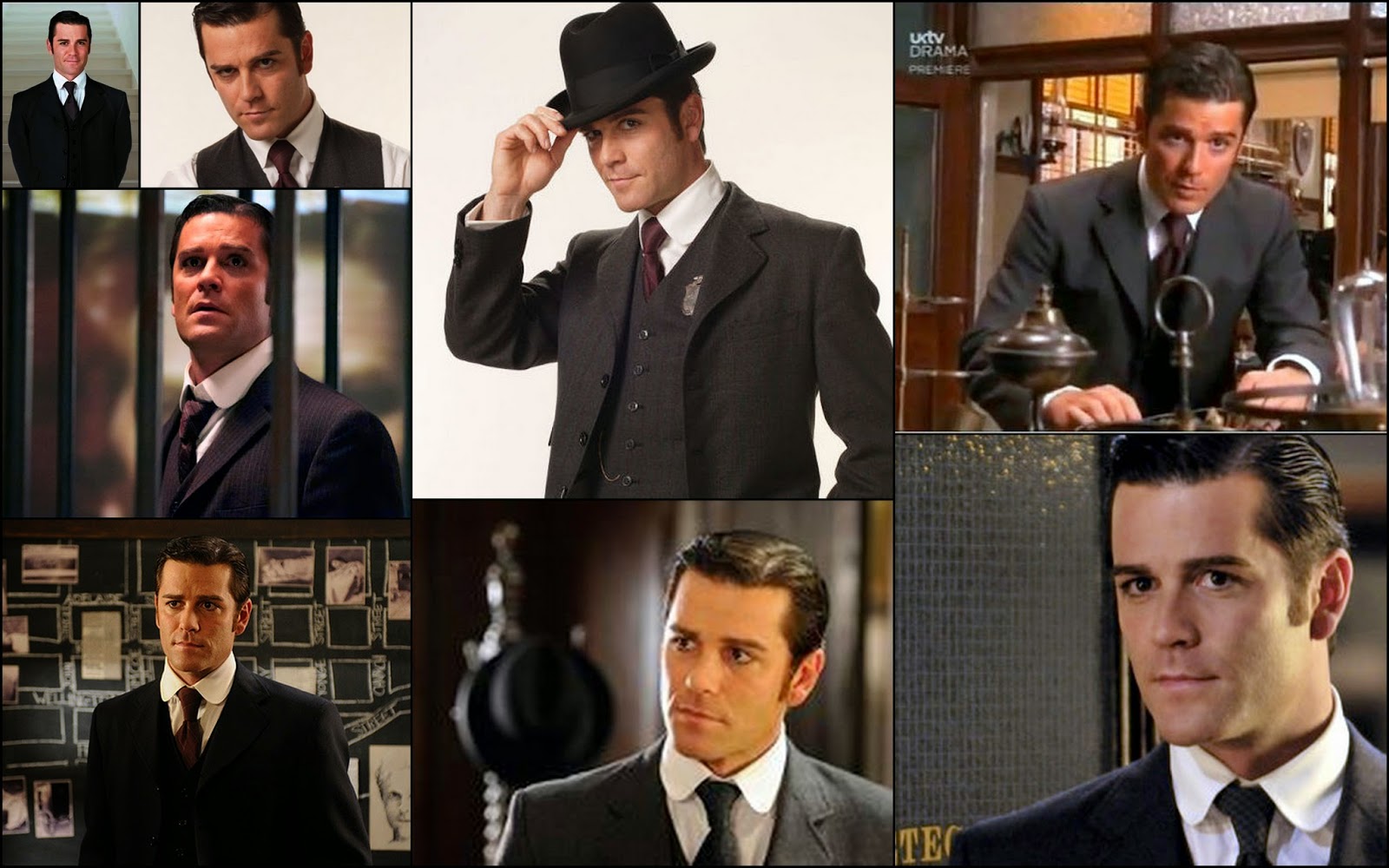 Canadian actor Yannick Bisson is the lead character, Detective William Murdoch, who works at Station Four. Murdoch is logical and scientific and appears to have a photographic memory. The detective is awesomely good looking, meticulous, methodical, intelligent, impeccably dressed and wears his iconic homburg while bicycling to a crime scene (this is the 19th century). Murdoch is a fan of modern science and often applies new scientific knowledge to solve crimes. Schooled by Jesuits, he developed an early interest in science and theology. His mother died when he was young, and for years he believed that his father had killed her. This matter was resolved in one episode. His family consists of a sister, Susannah (a nun) and a half-brother, Jasper (a Mountie).  Murdoch is Roman Catholic in a city that was then primarily Protestant and crosses himself every time he arrives at a murder. (Did I mention he was "eye candy" for the ladies?) 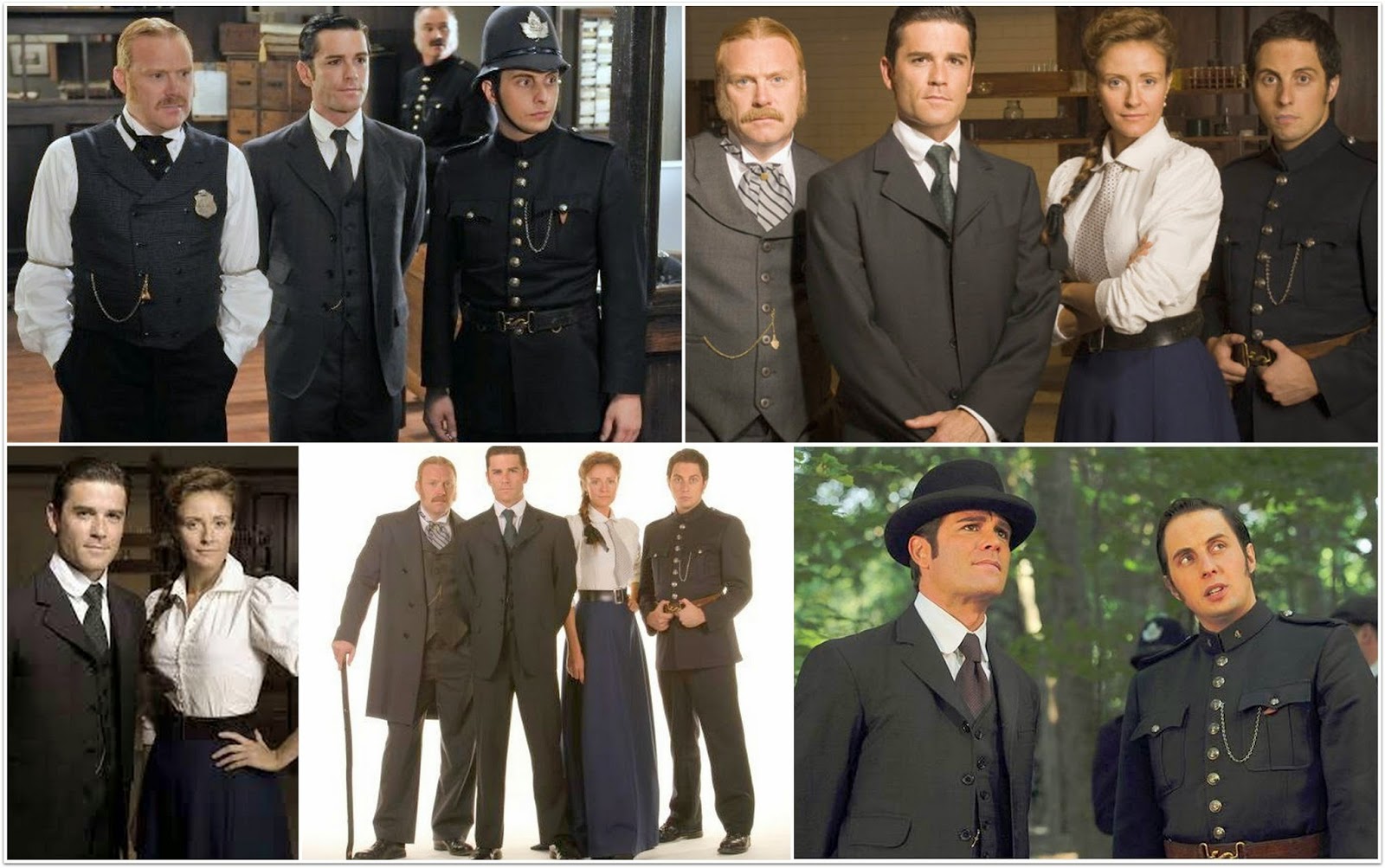 Murdoch is assisted by many other characters primarily: Dr. Julia Ogden, Inspector Thomas Brackenreid (Thomas Craig), and Constable George Crabtree. Others also appear in successive episodes, but are too numerous to include. 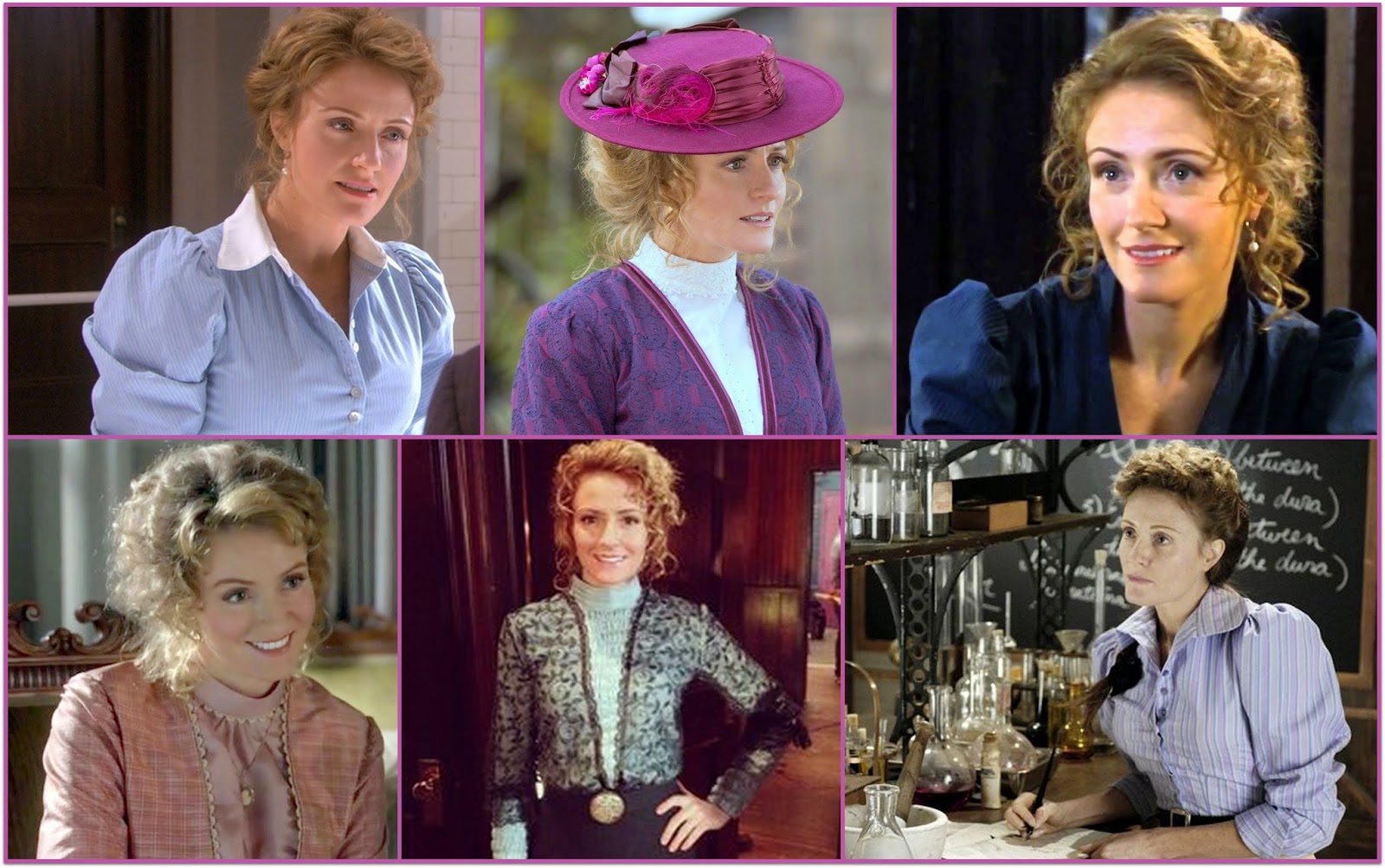 Australian actress Hélène Joy who portrays Dr. Ogden is very beautiful (as you can see). Her role is portrayed as an unconventional and modern-thinking woman who working as a skilled pathologist at the City Morgue has aided the Constabulary in solving cases. She sets up private practice and later becomes a psychiatrist. Dr Ogden has struggled for recognition in the face of male stereotyped positions. She is intelligent, resourceful, and humorous. She shares a deep interest in Murdoch's forensic methods. Throughout the series, she and Murdoch play a cat-and-mouse game of affection; this is a major subplot. (Spoiler: Julia and William become engaged at the end of Season 7.) 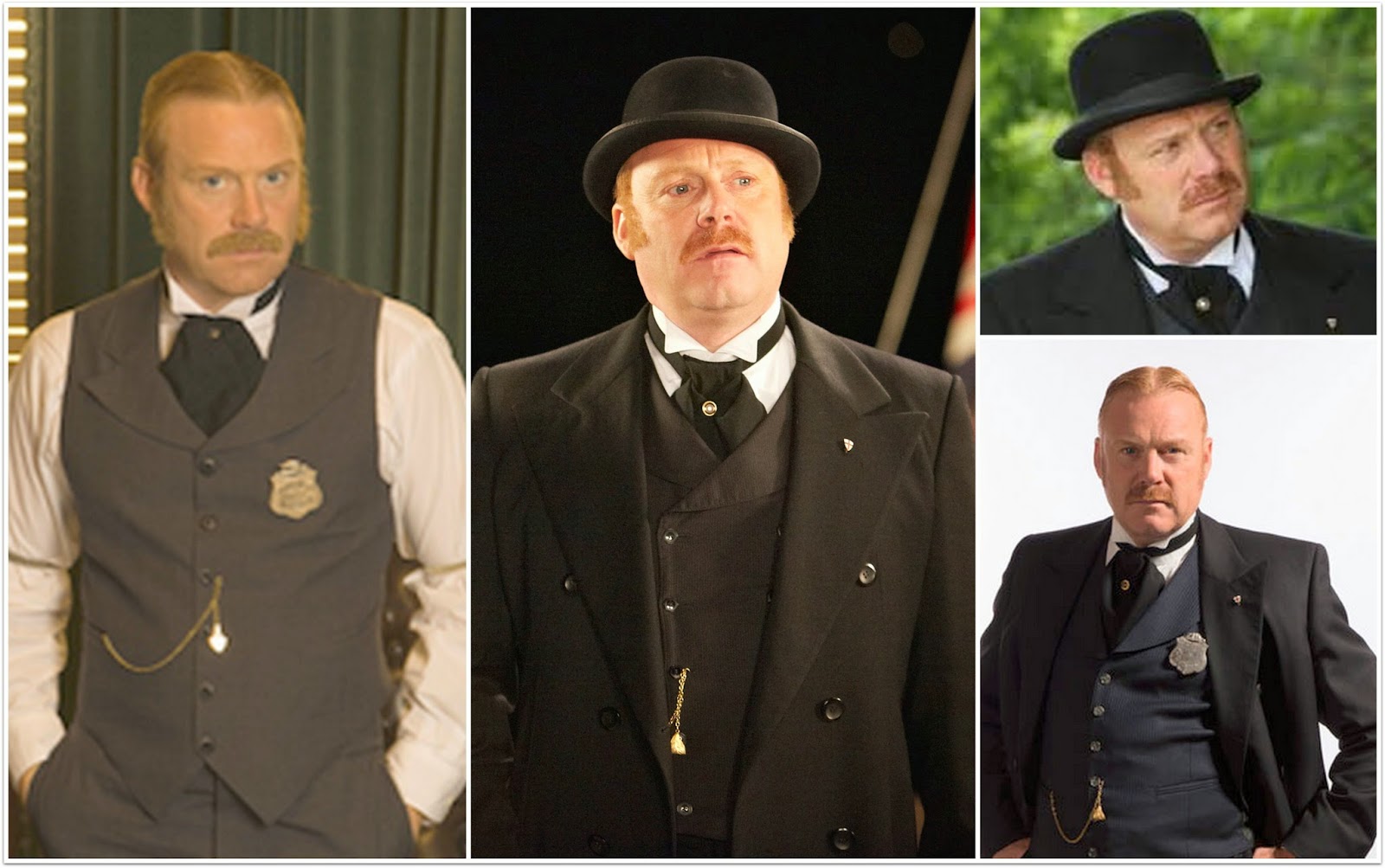 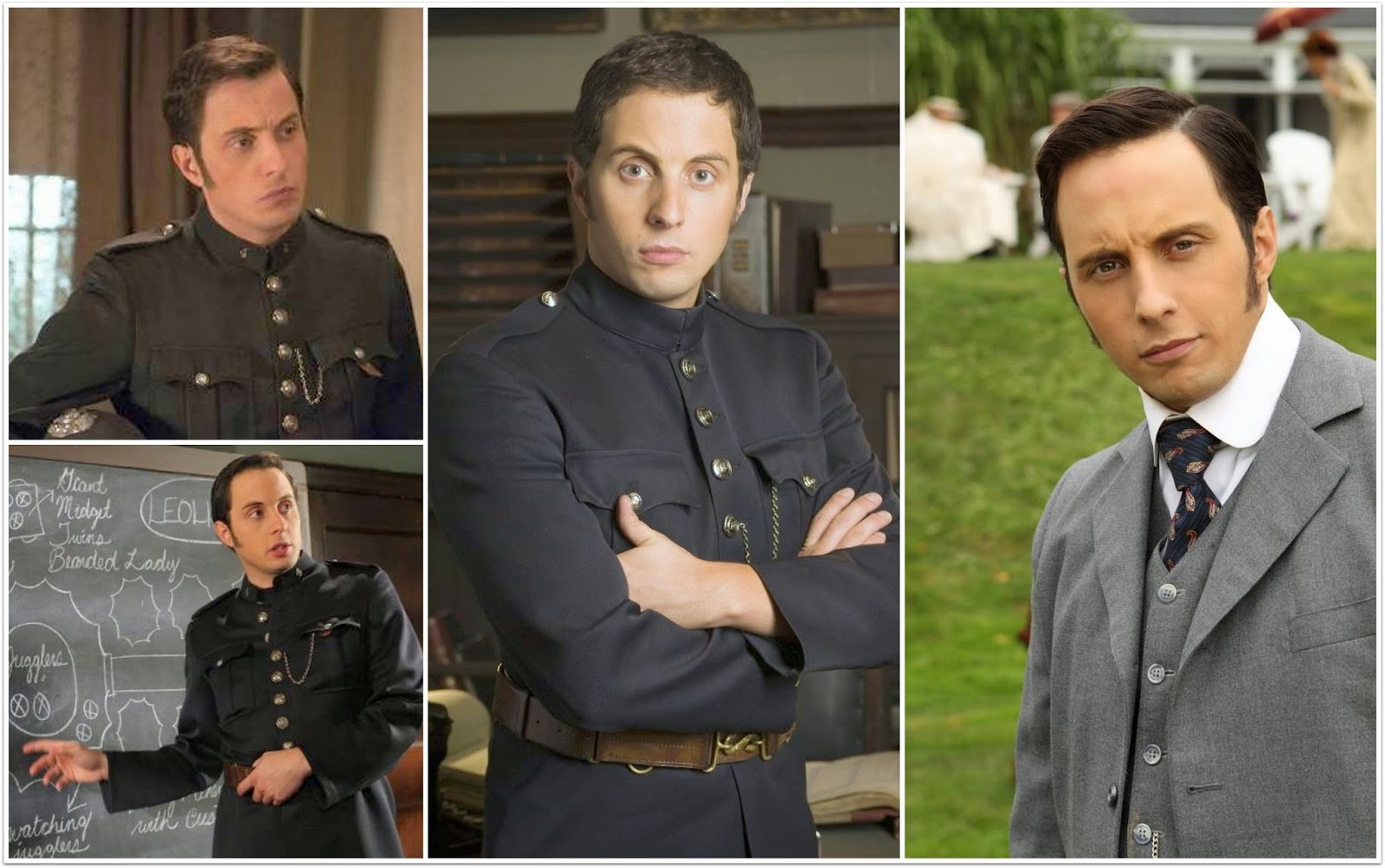 Canadian comedian and actor Jonny Harris as Constable Crabtree as an officer of the law and an aspiring mystery writer. Crabtree does most of the evidence collecting and nearly always provides his own unique theories to solving crimes. He often suggests commercial uses for Murdoch's inventions, many of which became real products. Constable Crabtree has many aunts; all are named after flowers or plants, such as Aster, Begonia, Daisy, Hyacinth, Iris, Ivy, Petunia and the nameless "my aunt" whose experiences he relates in various episodes. (Spoiler: in Season 7, viewers meet them all in Republic of Murdoch.)
Real history is an important factor in many episodes. Plots, though fictitious, have included known personalities such as Buffalo Bill Cody, Annie Oakley, Arthur Conan Doyle, Sir Winston Churchill, Thomas Edison, Henry Ford, Alexander Graham Bell, Harry Houdini, and Andrew Carnegie. Story lines have covered the invention of the auto, zeppelins, flying machines, Tesla death rays, time machines, and gas masks — something for everyone. Many stories are layered with actual events; some foreshadowed future events.


Murdoch Mysteries premiered on Canadian TV in 2008; after 5 seasons Rogers Media announced it would be discontinued. In 2011 it was "rescued" by CBC (Canadian Broadcasting Corporation) for seasons 6 and 7 and renewed for its 8th season in 2014. 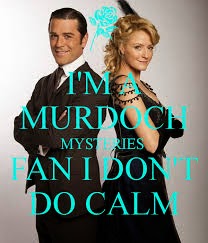 Are we hooked addicted?
You bet (does it show?)
We started watching Murdoch Mysteries on Netflix, which had seasons 1-3, then we watched seasons 4-5 on Amazon Prime. After watching all of these we found  another streaming subscription Acorn TV now has ALL 7 seasons online. The annual subscription is $49.95, but fast viewers could watch the entire series (over 100 episodes) for FREE during the offered 1-month trial. (It's how we started before subscribing.)

And, there's MORE, the opening theme by composer Robert Carli is my phone ringtone Yup, most definitely hooked!

(All images included in the collages were solely for purposes of describing this show.)

YOUR turn — Do you have a current (or past) favorite program — are you hooked?
Posted by Beatrice P. Boyd at 9:15 AM

yes, I am hooked on two that bob hates. i just watched both of them. they run on Tuesday night, he leaves on Wed AM for the park and i have the remote... Covert Affairs and Rizolli and Isles. love both of them

Well, I wish I could say I have favorites, but since I do NOT want another tele in the house and the Pres hasn't learned to share, I don't. He chooses and I watch...:)JP

I must admit that I haven't heard of this one.

Over here it's the Midsommer Murders that's number one. It always is :-)

will keep this n mind for our Netflix que. Right now we have little time to watch anything as the new series are at it again. We enjoy Jack Bauer, on Fox they have brought back the series 24 now with "Live another Day" Jack knows how to deal with terrorists.. the second season now of The Dome may soon drop off our watch list it's becoming too strange...ghosts appearing, etc. During regular season we do not miss or else we Tvo my very favorite TV show, Blacklist, Red played by James Spader is mysterious,espionage, borderline evil and well cannot say enough, am hooked on it. We have Monuments Men sitting here for weeks now from Netflix to watch, as I said this time of the year so much going on by the time it's dark I like to get a bit of reading in. One of the Murdoch characters is also in another current TV show we watch, the name escapes me at the moment...Oyher Regualr season TV favorites with us are Elementary, NCIS:LA, Person of Interest and Blue Bloods; and Leverage on Sunday eves, we will watch reruns of it.

Oddly enough, these Canadians never got hooked although we have caught it from time to time. I've read a few of the books too.

White Collar is the other series I could not name, same character as one of these from Murdoch...in it he is an ex con, art thief and high end thief workong with FBO

Sounds like a great program Beatrice,... I've always liked mysteries but don't watch them because (as you said) most of them have so much gruesome imagery. But I'd love to catch Murdoch if I ever get a chance! :)

We sheepishly admit to watching WWE wrestling most Monday evenings.

Sounds like a splendid show. I will have to check into it. I recognize the actor Yannick Bisson but I can't remember from where.

Oh yes, it's been on the air here for years, but I've never watched it. I can recommend another Canadian series, Republic of Doyle, a Newfoundland set series set in the current day that had a sort of crossover with this one. And Russell Crowe even did a guest turn on it once.

For me, a favourite series would have to be 24.

It sounds a bit like Nick and Nora Charles with an expanded cast . I will have to see about watching it. Thank you.

I also had to admit I've never heard of this one, but I'll bet I'd enjoy it!