No, you're haven't missed a couple of days—I did—this post is 2 days early 🙄. It was to post on Friday before we left for our anniversary getaway. But, I forgot to pre-schedule post and it posted, today, Wednesday. So the weekend has started early — ENJOY !
These photos give a new slant on the hang ten — highway style? 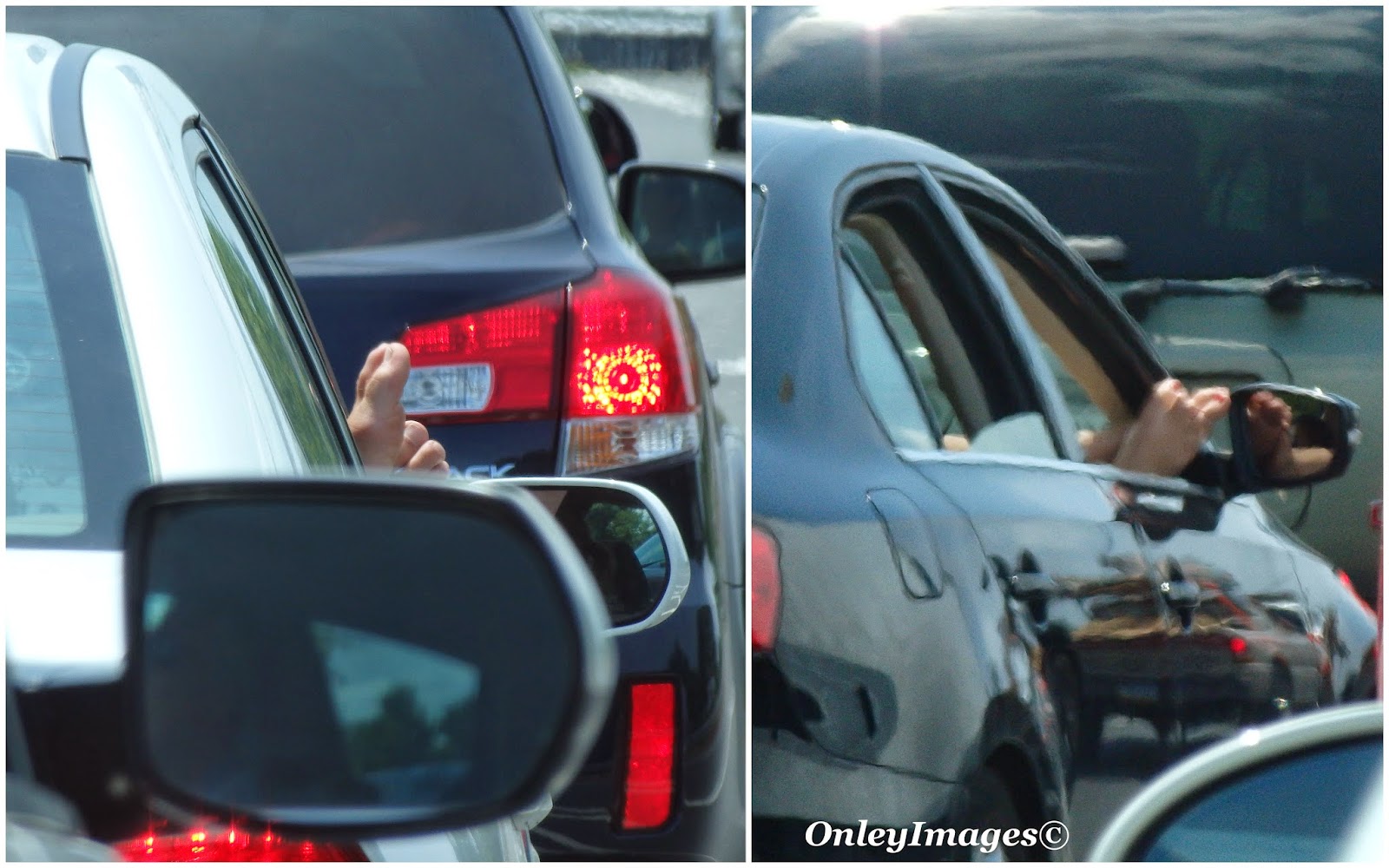 Hang ten originated from the surfing culture to refer to the act of hanging all ten toes off the front of a long board while surfing a wave. As a current slang term, it's most often used to mean sitting around and doing whatever or nothing. A variant has also been associated with a form of mild curse or interjection, like: I'll be hanged before going out in that storm.
Online sources credit origin to an iconic gesture, the shaka hand—in which thumb and pinkie are extended, three middle fingers curled against the palm. The gesture, referred to as hang ten or hang loose, grew popular across Hawaii in the 1960s when a used car salesman, David “Lippy” Espinda, used it as to sign-off television ads. He would throw a shaka and say the catch phrase, shaka, brah!  It's believed the word is not Hawaiian in origin, but possibly Japanese.
I read, but can't verify, that some Hawaiians today use the term the same as hello, goodbye, thanks, cool or as a sign of appreciation
Enjoy Your Weekend, Everyone
We're away in NH for our anniversary 🥂celebration🎉
Posted by Beatrice P. Boyd at 7:05 PM

I haven’t seen anyone do that in a long time. Probably since all cars got AC as the standard!

Human mind is too sharp at inventing sign languages for the impossible communication :)

have not heard of the hang ten, but it sure fits with the photo. I just tried to make the sign with the hand and mr Arthur said NO CAN DO

I hope those toes don't belong to the driver.

Happy Anniversary!! What day is yours actually? Ours was the 16th. I hope you are having a great time. Anywhere in NH would be lovely. Although I'd prefer to wait until late September/early October to be there...with everyone else in the country. LOL. Not crazy about the leaf-peeping crowds, however. Regarding Hang 10, that is also a brand of surfing/beach clothes I think...at least it used to be. I remember when that term was popular when I was a teen and a wannabe surfer...but I never got very far on a surfboard without falling off. I loved the song "Surfer Girl" by the Beach Boys. That was a LONG time ago! Hang Ten and have a great relaxing time for your anniversary!!!

Not a term I'm familiar with.

Well I hope you're having a great time!

Enjoy. Not sure it's a good idea to have ones feet out like that whilst moving along...

Happy anniversary! Yes, we still wave the shaka at each other. It's still commonly done in Hawaii.

Hope you're having fun!

The UK version is "I'll be hanged if I'm doing that" meaning the same thing. We also have the expression "hang loose", meaning doing nothing in particular. But we don't have the shaka gesture.

Hang Ten was a popular term when I was a kid in Southern California. I didn't know about the Hawaiian connection.

Beatrice, Happy anniversary! The origin of common sayings or phrases is interesting and, as a topic, its provides an endless variety of blog material. As a former Loss Prevention guy, a position which also encompassed safety, I suspect that whoever stuck their feet out the window is not buckled in. Hopefully I'm wrong. Take Care, Big Daddy Dave

I know the shaka from my vacation in Hawaii several years ago.

One story says the gesture can be traced back to a man in Oahu named Hamana Kali who lost three fingers in a sugar mill accident. (Or in some other type of accident depending upon whom you speak with)

There are statues in Hawaii honoring this man.