Regular readers and visitors to this blog may already know that we live in a building that was formerly part of the Nashua Manufacturing Company, a cotton textile manufacturer in Nashua, NH from 1823 to 1945.

This vintage postcard shows the mill during its heyday with its large prominent company sign. The bell that summoned mill workers was housed in the center white tower. 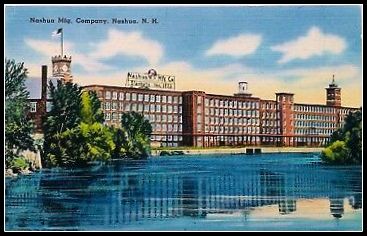 The company operated as the largest mills along the Nashua River during the 19th and early 20th centuries. Like many New England textile mills, it struggled during the Depression and shut down in 1948, after much of the textile industry moved South. In the mid to late 1960s after various enterprises used, then vacated the premises, six mill buildings were converted into apartment living.

This photo was taken one evening last week from the Main Street Bridge in downtown Nashua. While the building exteriors remain largely unchanged, the large company sign is long gone. These properties are listed on the U.S. National Register of Historic Places as a historic district. 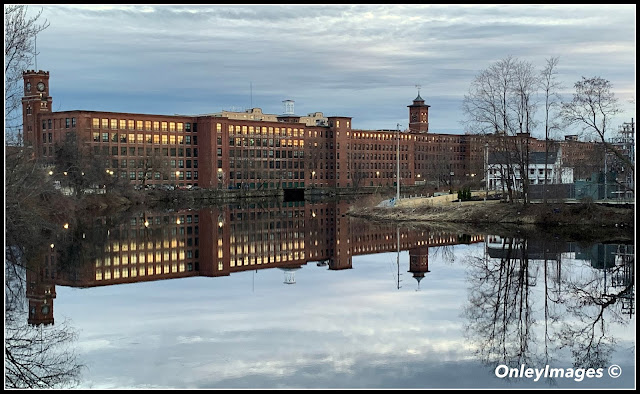 The view below doesn't capture the total size of the mill building complex. The white bell tower also can be seen here. The partially visible tower clock is one of two that are maintained and operational today. (A future post will show the inside of one tower.) 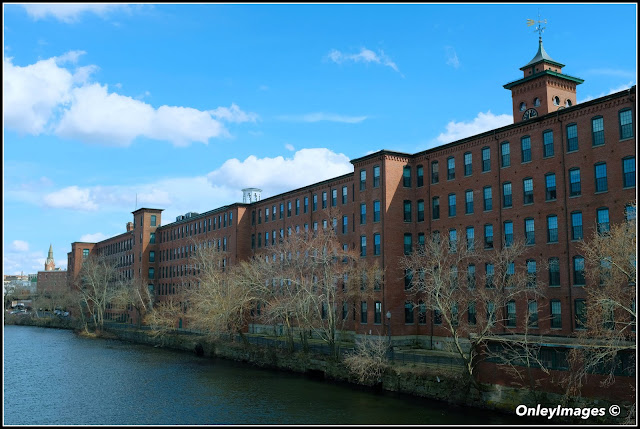 Here's another partial view that shows the front of the buildings. The green canopy is over stairs leading to an interior two-level parking garage. There's also an above ground parking area for apartment residents. 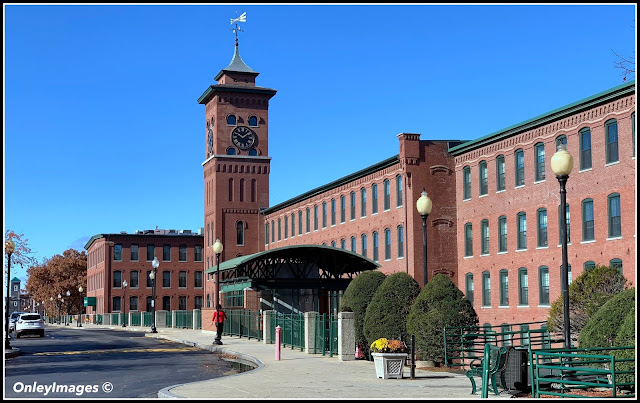 Both the exterior and interior parking areas formerly were the site of the water canal that provided power to mill buildings. This vintage postcard shows that original water canal. 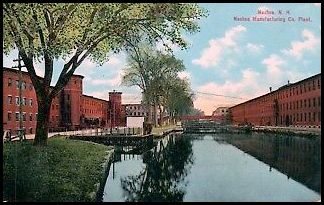 However, my favorite views are those captured from our 5th floor apartment window which show the Nashua River and part of downtown Nashua. This was a recent early morning view. 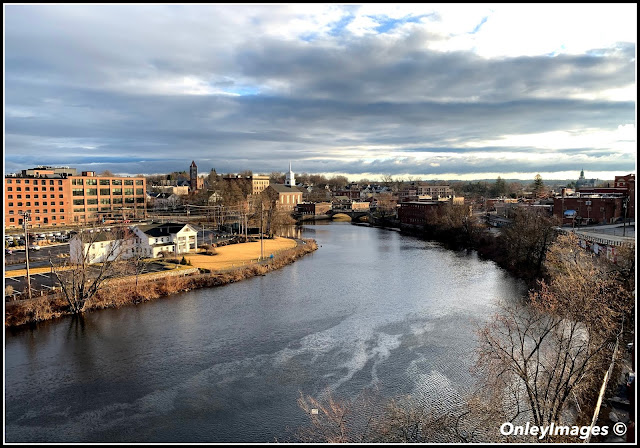 Here's the same view taken as skies cleared after a recent rain storm. 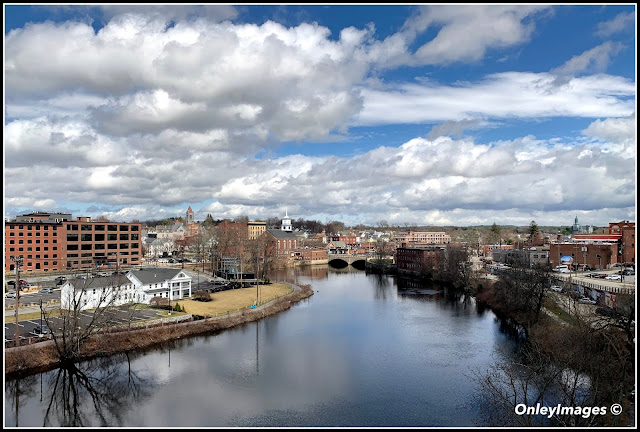 Friends have commented on how hard it must be for us to force ourselves to look at these views on a daily basis. We respond that we're managing and enjoy sharing them, like now.
Posted by Beatrice P. Boyd at 7:00 AM

Oh my gosh what a beautiful area and your view is breath taking!

that last photo is AMAZING! wow what a view you have, I love the photo of your building, the one just below the postcard at the beginning. they did a fantascti thing to refurbish and save the buidings and give them another use

What a joy that the beautiful building was saved and you are blessed with such amazing views.

Well yes, I certainly feel for you having to manage with the view, but do persevere.

You live in a beautiful building with a stunning view.

I don't wonder at your view at all. I would love to be able to look out my window and see that scene.

I love that mill building and the view is stunning.

The mill buildings along the Merrimack are really beautiful. They fixed up yours quite nice. I bet it is enjoyable to live there. Love the old postcard views. That is cool.

You really do have wonderful views....and I thank you for sharing them!

What a great idea to remodel the mill into apartments. The view from yours is spectacular.

This must be a great place to live, an interesting history too.

being part of such historic phenomena must be exciting

thank you for stunning images
they always make my day
specially this flowing river before and after snow or rain looks ALWAYS MAGICAL to me :)
i wish i can look at to it every day after opening my window ,just GORGEOUS!!!!!!!!!!!!!

That is such a wonderful recycle for a building. I guess I missed knowing that it was a factory but I always wondered how you rated such a good view of the river. Manufacturing needed the water power back then. Your scenes with the clouds at the bottom has clouds that look like ours today.

You do have great views!

You do have a lovely view to enjoy. What's best is that it is ever-changing with each season, but it is still lovely to see.

Such beautiful images you have created! The buildings are of course wonderful.... but it takes skill to get the PERSPECTIVES you do of those beautiful architectural buildings. I thank you! As an old codger who is trying to develop a better photographic eye.... I like to use your work as a tutorial of sorts to help me try to learn to visualize my own environment more "photogenically".